Security Alert as royal wedding invitation is offered for 2000 pounds 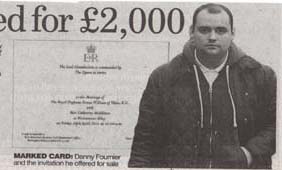 Security Alert as invitation is offered for 2000 pounds
By Caroline Graham and Jo Marfarlane
Sunday March 28, 2011
The Royal Wedding is at the center of a security alert after blank invitations to the event were offered for sale.
One of the invitations was sold to a Mail On Sunday journalist by a man claiming to work for Barnard & Westwood, the firm which printed it.
Danny Fournier 28, from South London, demanded 2000 pounds for the card and boasted he could get several others ahead of the April 29 wedding.
The Mail on Sunday launched an investigation after Mr.Fournier rang Los Angeles-based Royal memorabilia dealer Alicia Carroll on Tuesday offering her the invitation.
Ms. Carroll   said she did not consider buying it and contacted The Mail On Sunday. An undercover journalist met Mr. Fournier in Central London on Wednesday.
He has an invitation almost identical to the one shown to the media earlier this month, apart from the absence of two dotted lines where the names of guests were written by hand. Mr. Fournier explained the difference by claiming that only the first 300 cards - for close friends and family of William and Kate- had been printed with the lines.
Barnard & Westwood is a family-run printing company which has held a Royal warrant since 1986. It moved to its current premises in Farrington, central London in August last year. Until then, it had shared its factory with another firm, The Wren Press, in Chelsae. It is understood Mr. Fournier works for The Wren Press.
Mr. Fournier sent a text message to a reporter on Friday claiming ha had been sacked following inquiries by this newspaper.
Last night, after  The Mail on Sunday  showed staff at Barnard & Westwood the invitation and a photograph of Mr. Fournier, managing director Austen Kopley said: "I cannot confirm that any of the printed items you brought to my office were printed by Barnard & Westwood.  The person in the picture does not work for Barnard & Westwood and has never been an employee.
"If after further investigation I find that we have printed these documents, I will conduct a full internal inquiry."
A Buckingham Palace spokesman confirmed Barnard & Westwood had printed the wedding invitations.
A spokesperson for The Wren Press declined to comment.
Posted by Everything Royal at 5:13 PM